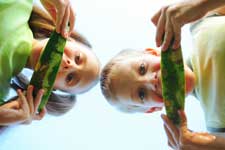 It’s almost time for our annual 4th of July festivities. Aside from watching fireworks, one of the biggest Independence Day traditions is cookout/picnic complete with fresh watermelon. If you’re like most Americans you probably have fond childhood memories of you and your siblings being handed freshly-cut slices of watermelon, and then huddling in a circle to bury your faces in the half-moon of juicy goodness. You probably also remember being told not to swallow the seeds because a melon could grow in your belly. (Now that you’re an adult, I can safely tell you that you won’t grow a melon in your belly.)

There is nothing better to do with a watermelon than devour an icy cold slice on a hot summer Texas day. Except maybe watching those British guys who slowly made a watermelon explode after spending 20 minutes and using hundreds of rubber bands. It’s not as tasty, but it’s pretty cool to watch.

No wonder the National Watermelon Promotion Board (yes, there really is such a Board) proclaims watermelons as the most consumed melon in the U.S. 44 states grow watermelons (with Texas consistently one of the largest growers).

Given the size and profitability of the industry, it was inevitable that a court case would arise over watermelons.

In 2003, Lozano, owner of Sandia Depot, Inc., entered into a verbal agreement with Yeary, owner of Sky Farms, regarding the growth, harvest, and sale of watermelons. Sandia Depot would supply Sky Farms with watermelon seeds and seed money (pun intended). Sky Farms would then grow the watermelons. The advance money was for use of land, irrigation, crop insurance, fertilizer, and other expenses. After the watermelons had matured, Sandia Depot would harvest, sell, and ship the melons. Once the melons were sold, Sandia Depot and Sky Farms would settle up these expenses and split the proceeds evenly. They continued their agreement and it all seemed like smooth sailing for the next 5 years.

Then, in 2009, Lozano filed suit against Yeary claiming Yeary owed money for the 2008 watermelon harvest. Lozano filed the lawsuit in his individual capacity with a d/b/a for Sandia Depot. Yeary d/b/a Sky Farms filed a counterclaim alleging Lozano failed to render a correct accounting of Yeary’s share of the watermelon crop proceeds from 2003 to 2008 and requested attorney’s fees.

Why Did He Lose? 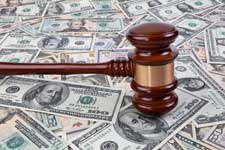 Lozano also contested the award of $240,996.57, plus pre- and post-judgment interest, against him. Yeary testified that, between 2004 and 2008, the gross total value of watermelons sold was $1,042,532.23. Lozano, on the other hand, testified that the total amount of gross sales was $204,392.00 for the same period of time. Yeary and Lozano also gave contradictory testimony regarding the amounts of advance monies. The appellate court upheld the award.
Lessons Learned:
Was this type of agreement required by law to be in writing? Probably no.

Would it have been better if it had been in writing? Yes!

Lozano might have been better off if he had put his agreement in writing. He could have specified that Yeary and Sky Farms were working with Sandia Depot, Inc. (instead of Lozano individually). One of the major reasons a person creates a corporation is for protection of personal liability, which Lozano “lost” when he didn’t maintain his corporate status when he filed suit!

Having an agreement in writing with specific terms helps ensure everyone is on the “same page” about how they are working together. It’s human nature to forget the exact details of what was discussed five years later. That’s why it’s so important to get it in writing. A dispute might have been avoided if they had bothered to work out the details in the beginning and got it all down on paper rather than wait until years had passed.

Remember: We’re all eager to move forward in business when the opportunity arises and we think we found the right person to do business with. However, don’t let the excitement you feel make you throw caution to the wind and forgo the legal formality of putting your contract in writing. It can save you huge headaches down the road when you protect yourself and your business!

Learn how to avoid the problems Lozano and Yeary faced.

Learn about keeping up with your company requirements to protect yourself from personal liability at our Insider Tips to Protect Your Business on July 24th. Contact me for more information.